Looking for a unique dessert idea?  This Olive Oil Gelato with Balsamic Strawberries will have you asking for seconds…I promise! 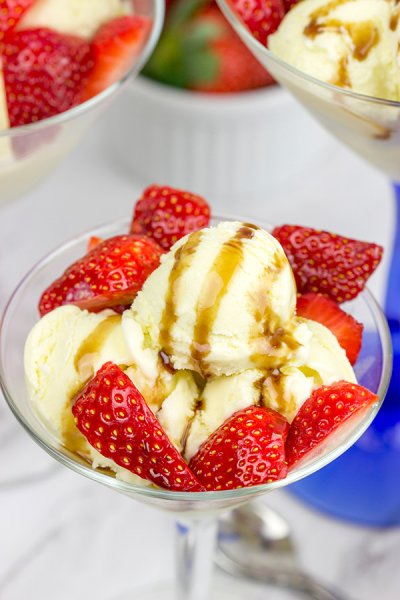 Ah, gelato.  I’ve had the chance to travel to Italy several times, and every time gelato plays a key role in the trip.  As in, I always made sure to eat gelato at least once per day.  I typically leaned towards more traditional flavors like cappuccino, stracciatella (vanilla with tiny flakes of chocolate) and hazelnut.  But when my wife and visited Venice on our honeymoon 7 years ago (7 years…has it been that long!?), we heard about a gelato shop with some really unique flavors.  So of course we had to check it out! 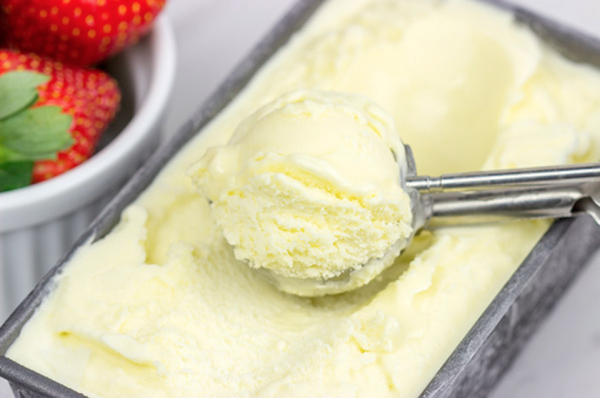 I opted for the green tea + cardamom flavors while Laura went for mango and rose. These aren’t flavors of gelato you’re going to stumble across at most shops! But while we were there, we also tasted an olive oil gelato. I admit that olive oil gelato sounds a bit different, but you’ve seriously got to give it a chance!

This stuff was so good that I had to come home and figure out how to make gelato…yeah, it’s that good! One bite, and you’ll think: ‘wow, this is tasty…but I can’t identify the flavor.’ So you try another bite. And then another bite. And the next thing you know, the bowl is empty. 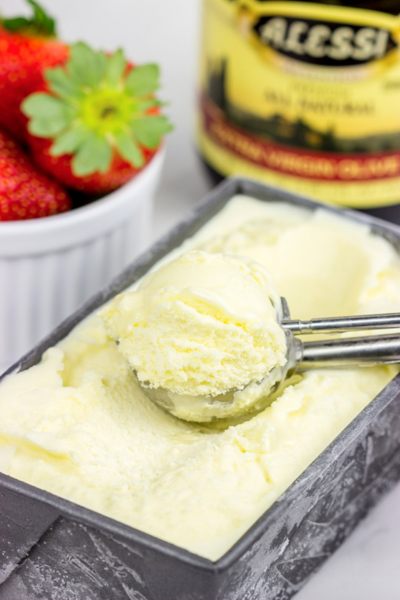 Back when we lived in Atlanta, there was a gelato shop close to where I lived, and it was always winning awards for the best gelato in the area.  So one day, I stopped in and asked the owner what made gelato different than ice cream.  It turns out that gelato uses a cooked custard base similar to French-style ice cream.  But the difference comes from the fact that gelato uses less cream than ice cream.  (There is a higher proportion of whole milk in gelato instead.)  Setting all food nerdiness aside, I’ll gladly accept a bowl of either gelato or ice cream…but I’ll always reach for gelato first if given the choice! 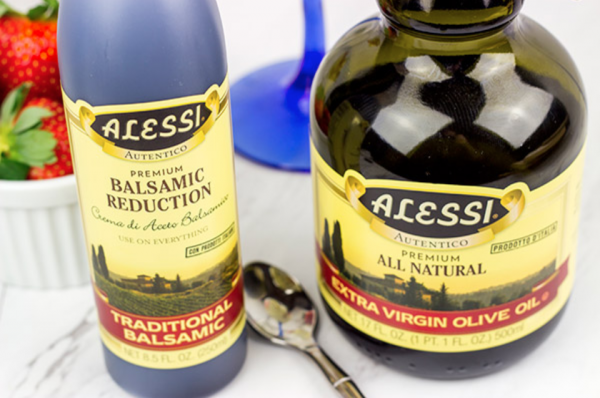 But we took this gelato to a whole new level this time. I’ve always been a fan of adding sliced strawberries to ice cream, so I decided to give that a shot here with this gelato. And then I got crazy. I grabbed a bottle of Alessi’s Balsamic Reduction and drizzled that on top of the gelato and strawberries. I mean, balsamic strawberries is a fairly common thing…so it only made sense to give this one a shot. And woah. Just woah! All of the elements of this dish were tasty in their own right, but together they became magic. The subtle olive oil flavor pairs so well the strawberries and balsamic reduction. I know it might sound rather unique, but you owe it to yourself to try this one! 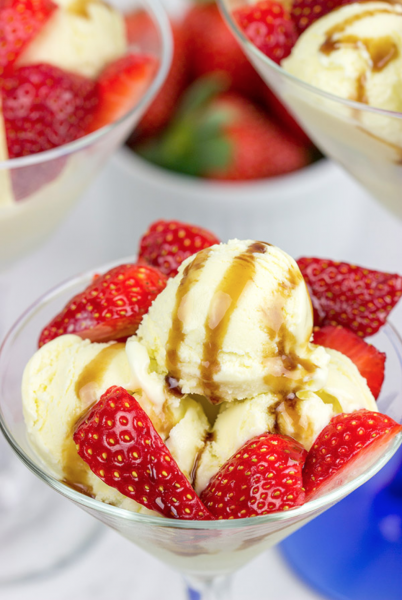 As I mentioned above, I drizzled a bit of Alessi’s Balsamic Reduction over the gelato and berries. I’m a big fan of keeping a bottle of this balsamic reduction in the pantry for everything from salads to cheeses. In case you’re wondering, a balsamic reduction is simply a balsamic vinegar that has been reduced to a sauce-like consistency. It makes for a great everyday sauce, and it really boosts the flavor in all types of dishes…including dessert!

I’ve long been a fan of Alessi as I find the flavor and quality of their products to be top notch. Alessi’s reductions don’t include any fillers or thickeners, so the flavor comes through perfectly. What’s more, they’ve recently expanded their line of balsamic reductions to include flavors like chocolate, coconut and ginger. Think how good that coconut balsamic reduction would be drizzled over berries…or gelato…or berries and gelato! You can purchase Alessi’s balsamic reductions (and olive oil!) at your local grocery store or online via Alessi’s website.

I do hope you give this Olive Oil Gelato with Balsamic Strawberries a shot. It’s unique, but I promise you’ll finish off the whole batch before you know it. Enjoy, my friends!