Alessi Gnocchi is not only a delicious traditional Italian cuisine, but it also easy and very quick to prepare. It can either be prepared simply by just adding Alessi Pasta Sauce, or Alessi Pesto and eating like pasta, or you can use it in a variety of recipes! We gathered some of our favorite recipes using our gnocchi to share with you today.

Cook gnocchi according to package directions and keep warm.

In a sauce pot, add olive oil and garlic and put on medium heat. Cook garlic until lightly golden brown, careful not to burn. Add vodka and cook until the alcohol has burned off (about 2 minutes).

Add all other ingredients except cream. Turn heat down and let simmer for 10-15 minutes. Add heavy cream and let cook another 5 minutes. Remove from stove to cool.

Remove the bay leaf from the sauce and pour the sauce in a blender. Blend until smooth. Pour over the gnocchi and mix well. Serve with fresh grated parmesan or Romano cheese.

Cook the vegetables until tender and crisp on the outside, about 5 minutes. Add the tomatoes and cook until juicy, about 3 minutes.

Cook the gnocchi according to package directions. Drain gnocchi, add to the pan with vegetables and mix well. Remove the pan from heat and stir in the basil, butter and lemon juice. Top with grated Parmesan. 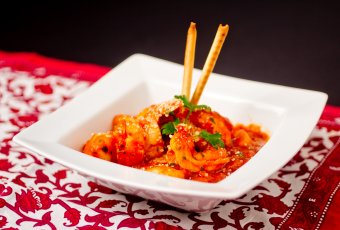 Cook Gnocchi according to package directions, set aside.

In a large mixing bowl, season the shrimp with the salt, pepper and paprika. In a sauce pot, heat the olive oil and add the seasoned shrimp, cooking for about 2 minutes each side. Remove the shrimp.

Add the Andouille sausage and the onion and cook for about 3 minutes. Then add the wine and reduce for another 2 minutes. Pour in the Fra Diavolo Sauce, mix well, and then add the cooked gnocchi and shrimp.

Cook for another 5 minutes before adding the oregano, red chili flakes and parsley. Add more paprika, salt and pepper to taste.

Cover a sheet tray in foil. Place bacon strips on covered sheet tray and with a brush, coat the bacon on both sides with balsamic reduction. Bake for 15 to 20 minutes. When done remove from oven and let cool. Chop bacon into bite sized pieces.

Cook gnocchi according to cooking instructions. Set aside.

Melt butter in a medium sauté pan. Add the flour and garlic puree and cook for about 3 minutes, stirring constantly, until a roux is formed. Add the heavy cream and stir until warmed.

Next add the parmesan cheese and stir until melted. Stir in the pesto and add salt and black pepper to taste. Sauce should be nice and thick at this point.

Add the cooked gnocchi and evenly coat with the sauce.

Divide the gnocchi among serving bowls and sprinkle the balsamic glazed bacon pieces and pine nuts on top of gnocchi and drizzle more pesto for added color. 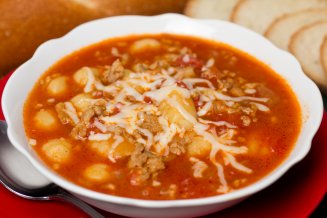 Heat olive oil in a heavy bottomed pot over medium heat. Cook onion until soft and translucent and then add  garlic; season with salt and pepper. Add Italian sausage and cook until browned and crumbled. Drain excess fat from  pot.

Add water, broth and tomatoes and bring to a boil. Add gnocchi to boiling liquid and simmer until gnocchi begin to float. When gnocchi float, turn off heat. Serve with shredded cheese.