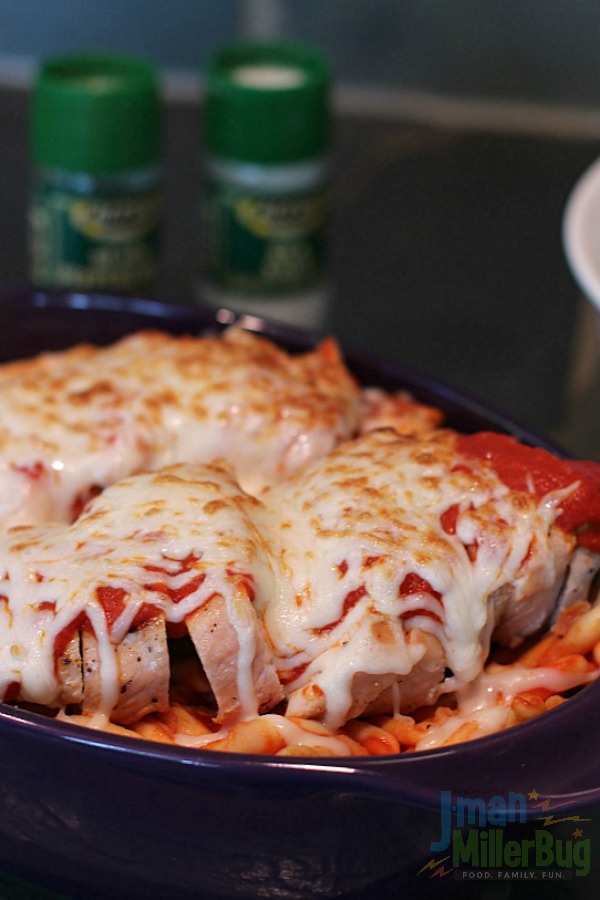 While chicken is soaking in oil, boil water and cook Alessi Organic Pasta according to the directions on the bag.

With pasta boiling, grill chicken breasts for about five minutes on each side or until they were no longer pink in the middle, remove from grill and slice into strips.

After heating the Alessi All Natural Pasta Sauce for a few minutes, drain pasta and mix in three-fourths of the sauce with cooked pasta, reserving the remainder of the sauce for the top of my chicken.

Place sliced chicken breasts on top of pasta and then spoon remainder of sauce over the top.

Sprinkle on fresh mozzarella, and pop grilled chicken parmesan into the oven on broil for about three minutes, just long enough to melt the cheese and brown it on the top.

Cook package of Alessi Gnocchi and toss in two teaspoons of Alessi Pesto Sauce.  Then sprinkle the top with Alessi Pine Nuts for a finishing touch.

Sliced some fresh bread and add some Alessi Extra Virgin Olive Oil to a small dish.

Pour in two teaspoons of Alessi Balsamic Vinegar and a generous helping of Alessi Dipping Spices.